Tinker is a 9 month old Lab mix that eats everything and anything. One day she quit eating and began vomiting. Her owners brought her into the clinic at that time, not knowing what she could 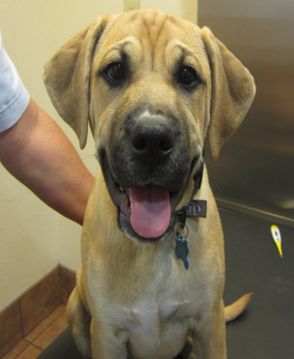 have eaten that was making her sick. She was seen by Dr. Murray and admitted to the hospital. X-rays were done with nothing found. Her appetite improved some, but she was still occasionally vomiting. A barium series was performed, where she was given a liquid contrast dye orally and x-rays were taken as it traveled thru the intestines to see if there is a blockage. No blockage was found, just a lot of inflammation and the barium moved slowly.

Tinker was still not doing well therefore; it was decided to do an exploratory surgery to see why her intestines were not moving properly. Dr. Charette found that Tinker’s colon had telescoped over part of her small intestine. (an ileocolic intussusception)Meaning her large intetine had swallowed her small intestine. Two inches of her colon, her cecum (appendix) and the majority of her illeum (last section of her small intestine had to be removed due to compromised blood supply and necrosis of the tissues involved (the tissue was dead) . Then an anastamosis was performed (suturing the two healthy ends of the gastro-intestinal tract back together).

Tinker did well at first, but she started to go down hill, so she was taken back to surgery two days later. It is very common once an itussuception has occured for it to happen again. Luckily that had not happened, however it was found that she had a severe illeus (her intestines were not moving)  and some of the sutures were begining to pull through one side of the lining on the colon. In order to ensure that the gut did not leak into the abdomen an additional repair was performed. After surgery Tinker was placed on medications to help her intestines start moving again. She had also developed a seroma, which is a complication where fluid collects under the skin, in this case due to a suture reaction at the incision site. A drain was inserted to help remove the fluid. After, two days the drain was removed.

Tinker was started on a special easily digestible diet a tablespoon at a time every couple of hours, which was gradually increased. Her bowels started moving normally. She was released to home where mom fed her home cooked chicken and rice for awhile, then gradually placed back on her regular food. Today Tinker is healthy, happy and a bouncing baby girl back to her wonderful self.