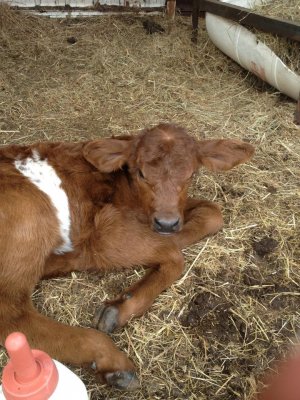 The day “Baby Bull Raper” came into this world was truly a miracle. His mother is a belted Galloway, a Scottish origin cow that is pretty rare in , and his sire is a large Brahma bull. When his mother went into labor she was unable to have him on her own because he was such a big calf. “Baby bull” was successfully “pulled” and he weighed over 100 pounds at birth.

Several hours after being born his owners noticed that the calf was not getting up and nursing. They were able to get a small amount of colostrum, that very important first milk out of his mother’s udder, but “Baby Bull Raper” could not figure out how to nurse a bottle. He and his mother arrived at the clinic about ten hours after he was born. He was getting weaker because he had not gotten much milk and was not able to stand up on his own. It was a cold February evening and although his mother was very attentive he was getting colder because we was not getting up and moving. Dr. Murray and her staff were able to take the colostrum the owner collected along with milk replacer and “tube” the calf, to get the nutrition he needed into his stomach. Dr. Murray then discovered that the reason he could not stand was that the tendons in both back legs were contracted. This is a problem that can occur when a large calf is in the womb and the legs have to stay bent because the calf is just too large to stretch out.  “Baby Bull” was so big that it took two people to help hold him up while a third person made his legs stretch. Over the next three days he got stronger and stronger, he would nurse on him mom as long as some one could help support his back end, and then he began to be able to support some of his own weight, and then stand for a few minutes on his own. By the time his owners were ready to pick him up he was able to walk down the alley on his own with his mother. Thanks to the dedication of the staff “Baby Bull Raper” is a healthy normal calf that you would never be able to tell had such a rough first few days of life.