Scout is a beautiful five year old Blue Merle Australian Shepard, belonging to Cliff and Cassandra Johnson of Perkins. Cassandra says, "Scout is my baby. She is always by my side. She loves to chase

squirrels and jump up at the tree limbs." She is a very active and happy dog whose world was about to be turned upside down. Scout’s story began on the evening of July 23rd 2012 when the neighbor’s female blue heeler wandered into her yard. This initiated a stand off between two territorial females that did not end well for her. Scout was simply trying to defend her home turf from this intruder and ended up coming away with some serious injuries to her right shoulder.

When Cassandra brought her into the clinic Scout was in a lot of pain and her wounds were so extensive that we immediately took x-rays, to ensure no bones had been broken. Thankfully it turned out that only soft tissues had been damaged. Not only was Scout traumatized by the situation, Cassandra was very distraught herself. Cassandra said "I thought she would lose her leg and I couldn’t take that chance. I treat her like my child. I talk to her all the time." We knew we had to save Scout’s leg and get her back 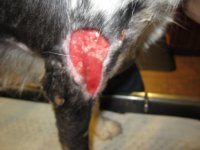 to her active and loyal self.

Scout was taken to surgery to repair the severe lacerations she had endured. Dr. Charette and staff had to suture three main areas of her shoulder back together and place a drainage tube, to prevent infection. Once Scout was out of surgery, she was sent home to rest and heal. A few days later Cassandra noticed the wound was starting to open so Scout returned for a checkup. A few of her stitches had pulled out and the wound wasn’t healing up to par so we hospitalized her for a few days to speed up the healing process and to ensure the wounds didn’t become infected. Scout’s wounds had to be cleaned and bandaged twice a day during her stay. Scout was truly 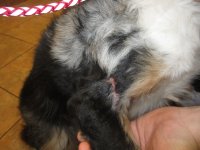 an awesome patient; she was so sweet and cooperative through it all.

Once back at home, Cassandra continued the routine treatment of dressing and bandaging Scout. It took nearly three months for the wounds to heal, but in the end Scout only had a small scar to show for her traumatic ordeal. Scout and Cassandra were happy to get back to life as they knew it; filled with lots of playing and squirrel chasing.