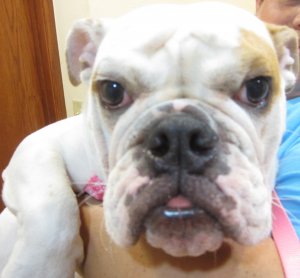 Lucy Rogers is a spirited 8 month old English bulldog. Her owner Gary brought her in July 2nd after Lucy had accidentally ingested a bottle of Ibuprofen. after arriving home found the bottle all chewed up with no pills in it. Knowing that it could be harmful to Lucy, brought her right in to have her examined. explained that Lucy was acting fine at the time, but he was concerned because he did not know how many pills were in the bottle, or how many Lucy had ingested.

brought Lucy in , Dr. Charette examined her and then immediately induced vomiting. Lucy was made to vomit multiple times until there were no more tablets present in the vomitus. As soon as Dr. Charette was sure that all of the ibuprofen had been expelled, he calculated the

proper dose of activated charcoal and had Jamie one of our caring technicians administer it to lucy orally. Lucy was a little reluctant to take the charcoal so she and Jamie got a little on each other as you can see in the picture. Activated charcoal absorbs any residual drug, coats the intestines to block further absorption, and helps to protect the lining of the GI tract. Ibuprofen can cause gastrointestinal ulceration, liver damage and early kidney failure. was absolutely right in bringing Lucy in for care.

Lucy was doing very well after her accidental ingestion of this toxic drug and got to go home that same day. At her follow up a week later Lucy had some blood work done so we could make sure all of her organs were not affected by the Ibuprofen. At the time her levels were returning to normal. As of today Lucy is doing great. said “she is back to her loveable, playful, and mischevious self.” Gary and his family think of Lucy as the “Princess” of the family; so they were very grateful that we were able to help Lucy.

Just as a side note to pet owners, Tylenol, Ibuprofen and, other human NSAIDS are not compatible with pets, and should not be given unless under the direction of your veterinarian. There are special drugs made for pets for these purposes.