Bernie is truly a miracle on four legs. Bernie was your typical easy going 5 year old cocker spaniel mix with gorgeous thick black hair. He had always been a healthy active dog, until one day last January when his owner's Sue & Cecil noticed that he was a little sluggish and noticed that when he urinated his urine was full of blood. Bernie came into the clinic, but an exam by Dr. Woodall along with some laboratory tests revealed that this was no simple bladder infection. His platelets, cells that help your blood clot were very low, which explained the bruises he had on his belly. Bernie was hospitalized and started on steroids to suppress his immune system along with antibiotics. His body was very slow to respond to the steroids, and 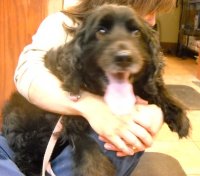 his red blood cells began to decrease too. Bernie was diagnosed with Immune Mediated Thrombocytopenia; a disease where ones own immune system turns on itself and destroys its own cells. Adding a second drug to suppress the immune system did not see to help either. Sue and Cecil took Bernie home because they could not bear to be without him when he was feeling so sick. Sue gave him his pills every couple of hours and cooked his favorite foods to try and get him to eat. Since we were so far unable to stop his body from hurting itself, Dr. Murray suggested trying a chemotherapy drug to suppress the immune system. Bernie came back to the clinic for an IV infusion of the drug during the day and then went back home. It takes 24-48 hours for the chemotherapy drug effects to be seen, but within 3 days his red blood cells and platelets were not only holding steady they were finally improving. Shortly thereafter the blood in his urine began to disappear and his appetite started to pick up. After one chemotherapy dose we were able to keep his immune system in check with the immunosuppressive pills. Bernie came into the clinic every couple of days to recheck his blood work for the first few weeks. It has been almost six months but Bernie has finally been taken off all of the medications and is back to his normal routine. Bernie was very close to loosing a battle with his immune system but thanks to his knowledgeable doctors and all of the great nursing care and love from his family he is a happy and healthy dog!