"Jack" is a 3 year old male Rhodesian Ridgeback mix who works for a living. He and his owner Mike Price hunt for wild boar and both are very good at their sport. "Jack" is Mike's best hunter, he loves what he does. This is why he is the leader of the hunting pack. 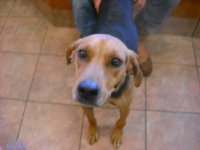 We first met "Jack" back in November 2009, he presented with a laceration to the groin, which resulted in an emergency neuter. On New Years Eve that same year, despite his Kevlar body amour, a boar punctured his chest that caused a collapsed lung. After surgery to re-inflate his lung, suture his wounds, and some much needed rest, he was quickly back to work hunting again. In March, July and September of 2010 he was again surgically repaired for his injuries from more hunts. After a few days in the hospital, he was again back to work as usual.

Almost a year had pasted, until August 2011 when "Jack" came in with yet another injury from a wild boar hunt. He was surgically repaired, again, and stayed with us again until feeling better. At this point he earned the term "nine lives", even though he is a dog, and only on life number six!

Since his last injury, Mike is considering "Jack" for retirement. He is helping in the training of his replacements so he can take it easy while Mike continues doing his favorite sport. "Jack" is truly a miracle from his first accident to present. Even with his scars and old injuries, Mike says he runs around like a puppy, happy and free, and always ready to go.