My dog Roxy is a 4 1/2 year old lab/golden retriever mix. She 's a great companion; she loves people and gets along exceptionally well with other cats and dogs. The primary disadvantage with Roxy is she has a propensity to swallow non-edible objects such as plastic, cigarettes, paper and socks. She has always been able to pass these foreign objects with little trouble other than a case of temporary constipation. Last week though she swallowed a sock 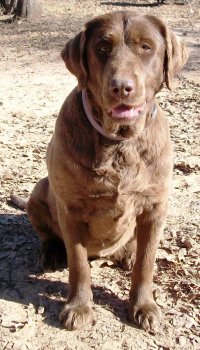 she could not pass. She became very lethargic, would not eat, and wanted to be left alone. I knew something was wrong so I took her to the Perkins Veterinary Clinic. Dr. Woodall recommended x-rays and bloodwork which he initiated. Her bloodwork results indicated her electrolytes were out of whack. Dr. Murray began treatment to rebalance her electrolytes. I was also faced with a serious decision as to wether to have exploratory surgery or wait and she how she responded. I could not bear the thought of just letting her wither away in pain so I elected to have surgery performed. It turns out that surgery was the right decision because Dr. Murray found and removed a sock from her small intestines. She wasn't out of the woods yet though because about two feet of her small intestines were very irritated. If her intestines didn't improve naturally then the irritated section would have to be removed. Fortunately, during her four day stay at the clinic after surgery, she gradually improved and was able to keep food and water down. Roxy is now at home and back to normal. Roxy's health situation could have easily ended tragically, but she received the medical attention she needed and perhaps she received a miracle as well.

I want to thank the Perkins Veterinary Clinic staff for exercising your expertise, professionalism, and tireless efforts in Roxy's behalf. I extend a special thanky you to Dr. Woodall, Dr. Murray and Lori as each of you was instrumental in restoring Roxy's health